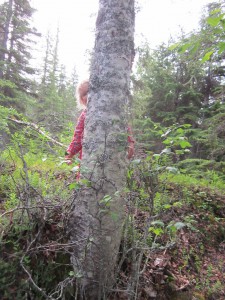 The gold mine is a magical place, it is full of wonder and amazement its a place that just draws people in. Is it the mystery and beauty of quartz creek that brings people here? We get a lot of visitors through out the summer months, even during thanksgiving weekend we had some visitors drive up. Usually not anyone we know, but normally very friendly.  So all visitors heed the following warning.  There are some elusive creatures that dwell in the the shadows of the trees up there at our quartz creek mine. Mischievous little creatures. You may find your full soda that you just set down is now half empty, or that shovel that you put next to the rock is now leaning against the tree. So keep a sharp eye out you may even catch a glimpse of one of the mystical beings, in fact I got a picture of one with my camera, it was peeking out from behind a tree and I am posting for all the world to see as proof that there is a reason that your coffee cup is not where you left it.(or maybe you just forgot where you put it.) 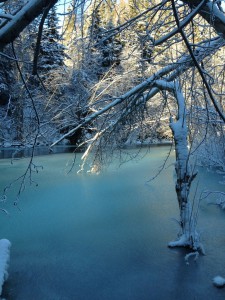 Well while we were up at the mine for Thanksgiving, I thought boy it sure would be fun to get the dredge out and find some gold. So I wandered on down to Quartz creek to see if there were any good spots to slip in the water. As the creek came into view I had to thoughts, “Brrrrrrrr” and “Boy I am glad the state does not allow dredging in the winter months.” This photo is what I saw.   Just so everyone knows, I am really only allowed to dredge in the Salmon creek/streams from May, 15 – July, 15. 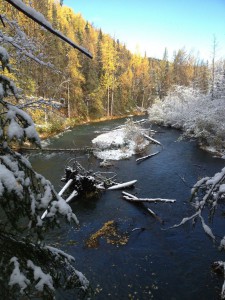 Termination snow, first snow of the season.  Strange that it only snowed on one side of quartz creek.  This signifies the end of our mining season.  Very sad day, but on a high note, it made for some great photo ops. 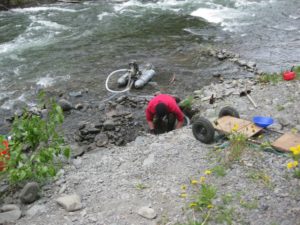 Everyone once and a while our friends will accompany us on our outings.  Well this is my buddy, Dom.  He is playing in the waters of the Resurrection creek in Hope.   This is a little blurb about him and the spot he is in.  We were here for the 4th of July weekend, and as those of you know running a dredge is cold hard work so it is nice to be able to take turns with people.  Well it was Doms turn to run the dredge and the rest of the group is up above him at camp relaxing around the fire when we hear Dom scream, “BRING ME A SPOON, I NEED A SPOON!”  So of course we all go to see what is going on.  Dom was very insistent on needing a spoon and at this point we still did not know why he needed a spoon.  Well the reason Dom was so frantic was, as he was dredging he uncovered a piece of gold about the size of a rice grain,  He could see it from above the water and he wanted a spoon to pick it up with.  He wanted a spoon quick because he thought it would wash away in the current,  well the current in the spot where he was working was not really that swift.  I gave him simple instructions, “Just reach down and pick it up.”  He looked at me kind of skeptically, but did it, I believe that was the first large piece of Gold Dom found.