I have to really apologise for not updating you all in a while.  Sometimes when stuff is going so bad, its really hard to talk about.  Remember a few posts back we had to get a new final drive for the excavator?  We ordered the new drive got it installed, everything was great.  Then the bolts all sheared off for some reason and we ruined that brand new 3k dollar drive.  That’s pretty much when I stopped updating you.

All is better now, got another new final drive, and with the help of Doug at minifinaldrives.com we got the pieces we needed to get the one we ruined rebuilt.  Doug even helped us diagnose what may have happened to cause the bolts to shear (track tension setting wrong in the owners manual).

But none of this is what you want to hear about is it?  We’ve hit upon a bedrock ledge, in that ledge we found a depression and that’s where this little guy came from.  I’ll never forget this this shining in the sun when I looked at the sluice box.  (Sorry my phone was dead, no photo).  We got as much gold in that one day as we normally get in two. 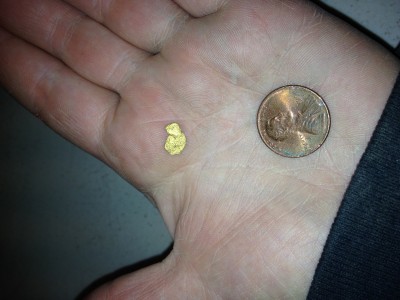 I cant wait to get back in there and see if this little guy has any big brothers.  Stay tuned…

Why oh why did I brag about how great things were going in the last post?  Its the granddaddy jinx of all jinxes!

Great weather this week, up in the 90’s.  Doesn’t sound like much to you guys in the lower 48 but up here in Alaska that’s miserably hot.  The heat caused a lightning storm like I have never seen.  I was up on the excavator, and the air just to feel weird.  We decided to break for a while as I was sitting in a giant orange lightning rod.  Sure enough, an hour later we had a thunderstorm like I’ve only seen in places like Missouri.  For those of you that don’t know, thunderstorms are pretty rare in Alaska.

Here starts the downward spiral, that storm sparked two forest fires nearby.  We’re keeping an eye on horizon, breathing the smoke, and the starter on the backhoe goes out.  Two of us get up early to head to town to get a new one.  When we get back, the others tell us the new final drive on the excavator we just installed has stopped working.  Further inspection tells us that all 9 bolts have rattled out.  As a result the mounting bolts reamed out the holes and have ruined a brand-new 3000 dollar drive.

So here we are, not one piece of equipment in moving condition and a forest fire on the way.  We’ve had better weeks I’ll tell you.  Luckily those firefighters are doing their job and it looks like they are getting ahead of the thing.  Just ordered another drive, hopefully we can get back to work soon to find gold and pay the repair bills!  These are the days we question if it is all worth it, I tell you.

Fall is here, the freeze is on, and it’s time to call it for the season.    We fenced off the digsite and hauled everything home. 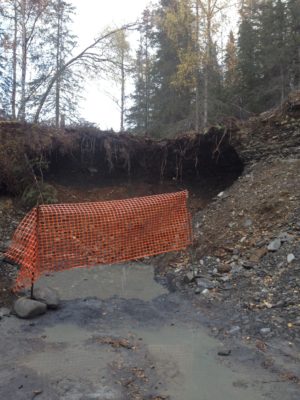 We have some great plans for next year, new equipment and modifications to our trommel should make for better production.

So until next year yellow gold, we bid you adieu 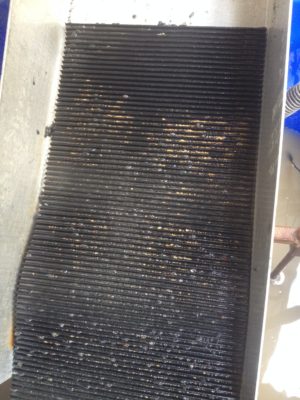